Misconception #1: Oh NO – there is no conversion data!

First of all, take a nice, deep breath. When people start cruising around the new interface, they don’t see any conversion data in their reports and have a mini panic-attack. In the old interface you have a handful of set metrics that show up in the right-hand columns on each report, some of which include conversion metrics.

The reason people can’t find the conversion data is because in the new interface you have the 3 tabs:
‘Site Usage’ tab
‘Goal Conversion’ tab
‘Ecommerce’ tab

Because the ‘Site Usage’ tab is the first tab you see and it doesn’t include conversion data, some people assume there just isn’t any conversion data there, period.

The new format actually gives you a much wider variety of choices on available data, including (but not limited to) conversion data. Surprise! You just have to know where to look.

Misconception #2: The change is purely cosmetic.

When you first see the new interface, the style has been clearly changed to a more updated design. Since the design changes are so obvious, some people think the new interface is simply to give Google Analytics a facelift.

But the new Google Analytics interface is not just another pretty face. The new interface introduced some great and long-awaited features like that ability to email reports, have a fully customized dashboard, the ability to export reports with the chart images, and a lot more.

In fact, even MORE new features were just added. You can read more about the cool new stuff (like hourly reporting) in the article “You Asked For it, You Got It. New Features Added to Google Analytics“.

The new interface completely overhauls the structure of Google Analytics and how the individual reports are inter-connected. This new organization can be disorienting at first, but once you learn the ins and outs of the new interface it has the potential to be a much more valuable asset to your business.

Misconception #3: People are worried they’ll have to reconfigure their account.

Even though the changes are quite extensive, you do not have to change your profile settings. You just have to learn how to use the reports and data for the optimum impact and use.

Our training course on the new Google Analytics Interface actually starts soon, August 9th, at 1:30pm ET. You can find out more on the training packages at https://roirevolution.com/trainingseries/.

So what is YOUR biggest worry, concern, or problem with the new interface? 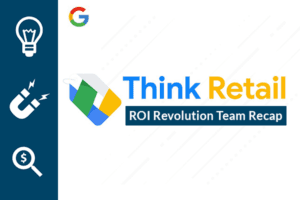 7 Ecommerce Strategies to Prepare for the 2022 Holiday Shopping Season