Home > SEO > Why Keyword Research Must Be an Ongoing Process

Why Keyword Research Must Be an Ongoing Process

Some people think keyword research is a one-and-done activity – you find high-volume, lower-competition keywords, seed them into your website’s page, check the indexing, set it, and forget it. These days, that idea can’t be farther from the truth.

In a recent update to Google’s How Search Works pages, Google states that in 2020 alone, they made 4,500 improvements to Google Search resulting in 3,620 launches. While most search engine optimizers (SEOs) hear about the announced core algorithm updates that happen a few times each year, those with their fingers on the pulse understand that Google is actually updating its algorithms continually.

Google doesn’t announce each update because – let’s face it – 3,620 launches in a single year means that not every update is newsworthy. They only announce the major updates, and even when they do, they don’t always explain what’s included in them.

It’s up to savvy SEOs to stay abreast of Google’s constant changes. We read the latest news and analysis from other experts in the field, monitor Google’s information outlets, and discuss unannounced changes amongst ourselves as we look for clues to what’s new in the way Google interprets the world of search.

In 2021, the evolution of search seems to have intensified even more as Google’s ability to apply natural language processing has grown exponentially.

In 2019, Google introduced the BERT algorithm (Bidirectional Encoder Representations from Transformers). BERT uses machine learning to not only understand what words in a phrase or sentence mean but also to understand the nuances of the context of the sentence. It was a huge leap forward in Google’s long path to accurately interpreting searcher intent.

On May 18, 2021, Google announced MUM (Multitask Unified Model), which they claim is one thousand times more powerful than BERT. It’s different from BERT in that it “not only understands language but also generates it.” 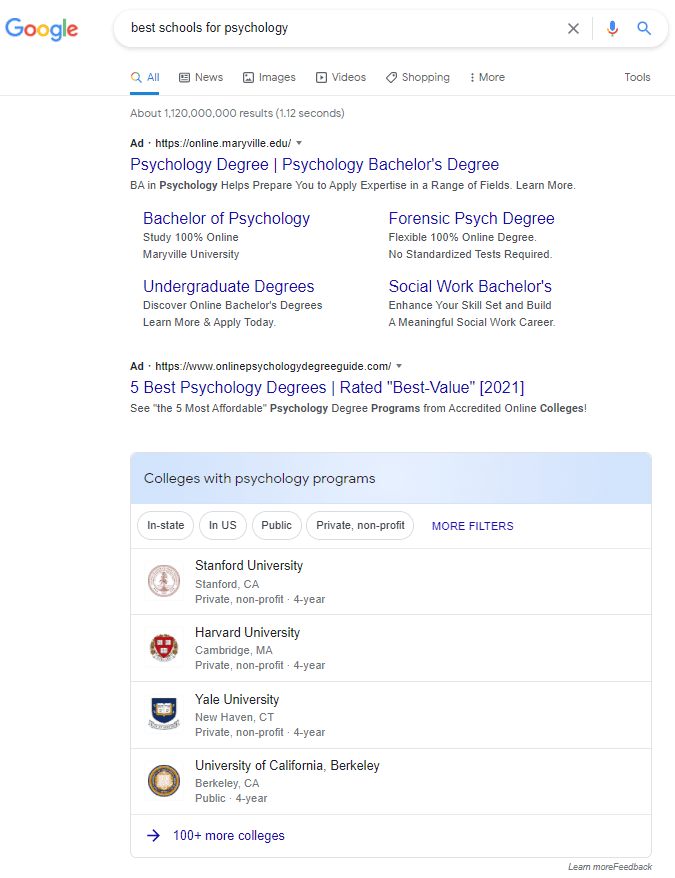 MUM can put a user’s search query into the context that it thinks makes the most sense. For example, when I query “best schools for psychology,” Google returns the usual ads for schools and guides along with the organic entries for articles listing favorite schools for psychology from news media and organizations, but now it also includes a prominent list of colleges with psychology programs between the ads and the organic results.

Google knows that someone searching “best schools” may also be interested in a complete list of schools that offer that degree. It even gives you the option to filter those schools by in-state, in US, public, and private, non-profit – a very helpful enhancement!

An SEO looking to capitalize on the original query may want to create an article to answer the question “best schools for psychology,” and if they work for a school that offers a psychology program, they may also want to make sure their website has its technical SEO buttoned up to ensure they’re listed in this additional SERP feature.

While BERT and MUM were widely announced updates, not everyone understands their ramifications. Both are based on artificial intelligence (AI) and natural language processing, which means the machines learn more with every use – exponentially more.

It’s estimated that Google processes 63,000 search queries every second. Each query is a learning opportunity for BERT and MUM. Imagine how quickly things can change with that volume of data!

Given how many Search improvements are made in a single year and how quickly BERT and MUM are learning and evolving, it’s folly to assume keyword research performed a year ago would yield the same results today.

In fact, this year, ROI Revolution’s SEO team has noticed Google’s interpretation of some keywords has seemingly changed from week to week.

In that case, an ecommerce site owner would notice fewer impressions and fewer clicks – meaning less traffic to a once-popular page. Revenue suffers and frustration ensues.

And in just a month or two, Google’s interpretation could change again. Without the golden key to the secret black box of Google’s algorithms, here are some things SEOs must do:

At ROI Revolution, we consider the combination of keywords and content to be one of the three main pillars of SEO. The other two are technical site structure and outreach. Keeping up with changes to Google Search, reacting to those changes appropriately, and optimizing SEO strategy takes an experienced team. Let us know if you’re interested in learning more about what our SEO team can do for you. 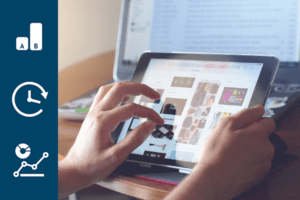 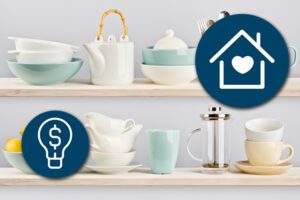 Infographic: The State of the Home Goods Industry